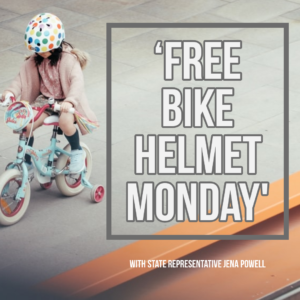 Representative Powell will be giving out free bike helmets at both the Miami and Great Darke County Fairs.

At 5pm on Monday, August 12th, stop by the GOP tent at the Miami County Fair. The first 50 children will receive bike helmets (sizes are first come, first serve).

At 5pm on Monday, August 19th, stop by the GOP tent at the Darke County Fair. The first 50 children will receive bike helmets (sizes are first come, first serve).

Rep. Powell looks forward to seeing you and your family!

Rep. Jena Powell (R-Arcanum) will be sending a constituent liaison from her Columbus office to the district every month to meet with constituents.

“We are here to serve the people of Miami and Southern Darke County,” said Powell. “We understand that government can be challenging and hard to navigate on your own. I’m thrilled to have a constituent liaison here to help you navigate the bureaucratic process we’re fighting so hard to simplify.”

On the first Monday of every month, Representative Powell’s office will hold in-district office hours at the local libraries from 9am-1pm.

To schedule a personal meeting with Rep. Powell, or if you have any state government concerns you can give our office a call at 614-466-8114 or email Rep80@ohiohouse.gov.

* Constituent liaison hours is where a liaison from Rep. Powell’s office will be in district to help with government questions and issues. If you wish to meet specifically with Rep. Powell, come to one of her town halls and/or schedule a personal meeting with her.

As you many of you know, I grew up a 4-H kid. All summer I would have a countdown leading up to the great Darke County Fair. I loved everything about it! Showing my sheep, camping, and spending long days in the showing barns.

I haven’t missed a fair in my entire life, because to me the fair is more than a week of fun; it is what our country is so badly missing – tight-knit community that cheers each other on in the good times and the bad. We can look around and see an epidemic of loneliness far reaching throughout the nation, and it is wreaking havoc on society, especially our children.

Many people have tried to solve this problem of loneliness – some have succeeded and others have not. I’ve learned over time that to receive love, you must be open to giving it. In other words, you must give of yourself in the community before you can be part of a community.

Sometimes it’s hard to know how to give. Maybe the talents, time, or resources aren’t available to you and maybe you just don’t know where to go. I understand that, but community is available because community starts with you.

The fair is almost here. Students in our community have worked long days getting animals and projects ready for the fair. For some of the students this is a huge step outside their comfort zone. Whether it’s showing an animal, running for Jr. Fair Board, or entering a cooking competition, they’ve chosen to put themselves out there in public to win or lose. It’s scary. I remember one year my sheep got loose in the arena and ran all over. I was embarrassed and crying by the end. But because of the encouragement of my parents and leaders around me, I tried again and didn’t give up.

For many students the fair is shaping much of their future, and determines how they react and act in challenging situations. Sometimes all one student needs is a bit of encouragement.

If you’re looking for community, the fair is the place to be. But don’t go looking to be a consumer of community. Go and give back! Volunteer at a local booth, encourage the students, sit in the stands and cheer them on, show up with a smile. Community is all around us and fair season is the time to open our eyes and invest time, love, and a smile.

Together let’s make our community great! 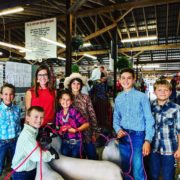 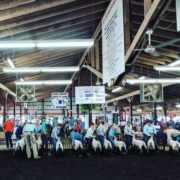 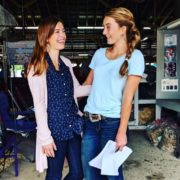 COLUMBUS –
Rep. Jena Powell (R-Arcanum) is joint-sponsoring a bill with Rep. Derek Merrin (R-) to streamline the Ohio tax code. At their direction, the Legislative Service Commission identified errors in the tax code, of which 125 are corrected by HB 197. HB 197 fixes typographical errors, incorrect or non-existent cross references, obsolete sections, awkward organization, and generic references to the effective date of an amendment. 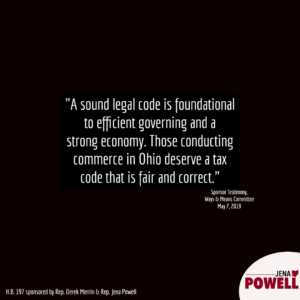 “Thrilled to be working on tax policy here in Ohio,” says Powell. “The tax code is confusing, and HB 197 will help clean up some of the mistakes in the code that make it hard to read. This bill will make it easier for businesses and families to thrive in our state.”

The bill has had its first hearing in Ways and Means Committee. You can read the bill and see the analysis at www.ohiohouse.gov if you search legislation for HB 197. As always, if you have state government concerns you can give our office a call at 614-466-8114 or email Rep80@ohiohouse.gov.

“We are saying enough is enough. We’re tired of the exploitation of women and children in Ohio,” said Powell, a freshman lawmaker from Laura. She ties the use of pornography with the sex trafficking and sexual abuse.

“The use of pornography in the younger age demographic is becoming more and more common. When you look people around you, you can see the hardships that addiction to pornography have on families,” she said. “This has been a big movement around the United States, to declare it a public health crisis, because that is what it is.”

The American Civil Liberties Union of Ohio declined to comment on the resolution since it would not have the force of law even if passes.

Citizens for Community Values, a Cincinnati-based non-profit that in 2004 put an anti-gay marriage measure on the statewide ballot, is backing the resolution.

Ohio lawmakers occasionally support laws that crack down on adult businesses, such as strip clubs and pornography.

In 2007, Ohio legislators passed a law that forces strip clubs, peep shows, and other adult businesses to close between midnight and 6 a.m. and institutes a no-touch rule between strippers and patrons. 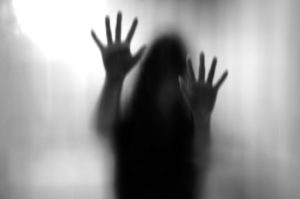 Since taking office in January our office has been working through new policy (bills) that will give our community more freedom! In the coming weeks we will be rolling those bills out for you to look over & support!
To best understand the legislative process checkout the graph below. As always let us know if you have any questions. 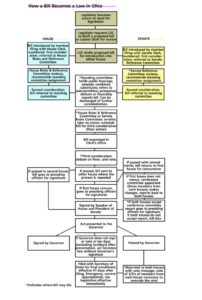 This summer we have some amazing interns in our Columbus office. From research, to joining me at committee and session. They are getting experience at the Statehouse as we fight for our community. Follow along and meet the summer team! 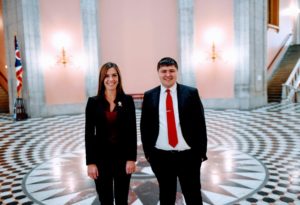 “My name is Austin Lucous, and I am eager to work with Representative Jena Powell in serving Miami and Darke counties! I am currently beginning my junior year at Wright State University studying political science, and I am a proud 2017 graduate of Milton-Union High School in West Milton, Ohio. I began my journey in politics my senior year of high school when I campaigned for Rob Portman for US Senate. From there, I campaigned for Steve Huffman for State Senate, and finally, I campaigned for Representative Powell in her run for State Representative! When I’m not working on a campaign, I enjoy going out to eat with friends, playing tennis, and learning French. Living in the district my entire life, I am thrilled to work for my community and you!” 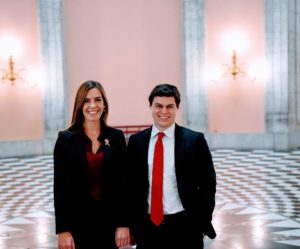 “Hello my name is Cameron Haught, and I have interning in Representative Powell’s office since January. I am currently attending Clark State Community College in Springfield with plans on attending Wright State University next year to major in political science. While going to school and interning in Columbus, I work full time at Kroger in Springfield. In my free time, I enjoy exercising, and watching the Cincinnati Reds.” 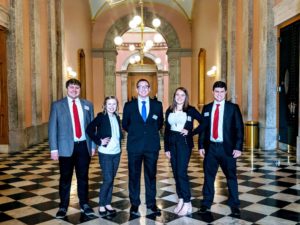 “Hello, I am Mason Gordon and I began interning with Representative Powell in May of 2019. I am from Wayne Lakes, I went to Franklin Monroe High School and Edison State Community College, and I am an incoming political science major at the University of Dayton. I spend my free time with my family and playing soccer.”

Looking for a fall internship? Contact our office to submit an application.

As always if you have any questions please feel free to reach out to our office at 614-466-8114 or email Rep80@ohiohouse.gov.

As most of you know, Memorial Day week tornadoes wreaked havoc on homes, businesses, and churches in our community. The office of Representative Jena Powell (R-Arcanum) has received lots of questions regarding the disaster status of West Milton, and other parts of Darke and Miami County that were hit hard by the tornadoes and storms.

As of today, President Trump has granted Governor DeWine’s request for a Disaster Declaration due to the tornadoes, severe storms, flooding, landslides, and straight-line winds that affected Ohio counties on May 27-29. The counties designated for individual assistance include Auglaize, Darke, Greene, Hocking, Mercer, Miami, Montgomery, Muskingum, Perry, and Pickaway Counties.

Rep. Powell says, “Our community has been hit hard by the severe storms and tornadoes of May 27-29, adding to weather challenges that have been ongoing this year. This Disaster Declaration recognizes the significance of the damage, and will help our community rebuild.”

If you have questions about the Disaster Declaration or how to receive assistance, along with any state government concerns, you can give our office a call at 614-466-8114 or email Rep80@ohiohouse.gov.

COLUMBUS –
Representative Powell (R-Arcanum) has been appointed to the Elder Abuse Commission. Her first meeting on this board will be next Monday, June 24th. Ohio Speaker of the House Larry Householder (R-Glenford) appointed Rep. Powell to sit on the Commission on behalf of the Ohio House of Representatives, alongside her colleague Rep. Russo (D-Upper Arlington).
The Elder Abuse Commission is under the office of Ohio Attorney General Dave Yost. The Commission facilitates discussion around problems, solutions, and funding related to the issue of elder harm and exploitation.
Rep. Powell says, “With the rise of older people in our community, it is vital that we think critically about how they are being cared for during this phase of their lives. I look forward to being a voice for the elderly on this Commission, and fighting for education about the potential for elder abuse.”
As always, if you have state government concerns you can give our office a call at 614-466-8114 or email Rep80@ohiohouse.gov.