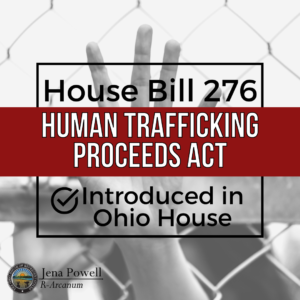 The bill prohibits an individual from knowingly receiving money or anything of value from a prostitute that was exchanged for sexual activity, making it a third degree felony or a second degree felony if the prostitute is a minor.

“Ohio has the fourth highest rate of suspected human trafficking in the United States,” said Powell. “Victims, often underage girls, are coerced and abused while their victimizer walks away with a profit.”

The bill sponsors noted that current law makes it difficult to charge pimps and trafficking because they are not physically present at the scene where prostitution is occurring.

“In order to push against the indignity and horror of sex trafficking we must bring these people out of the shadows,” said Schmidt. “The goal of this legislation is to serve as a new tool that will make it easier for law enforcement and prosecutors to tie traffickers and pimps to illegal activity and return convictions for these heinous crimes.”

The measure has the support of Ohio Attorney General Dave Yost.

State Representative Jena Powell is currently serving her second term as a state representative. She represents the 80th Ohio House District, which encompasses Miami County and a portion of Darke County.

State Representative Jean Schmidt is serving her first term in the Ohio House of Representatives. She represents the 65th house district, which includes northwestern Clermont County.

Instagram did not return a 200. Follow Me!
Powell Cosponsors Legislation Prohibiting Vaccine Passports Rep. Powell In The News!
Scroll to top