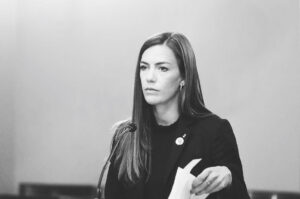 The bill creates the crime of fraudulent assisted reproduction, making it a third degree felony for a licensed health care professional to purposely or knowingly use human reproductive material from a donor without the patient’s consent.

Current Ohio law does not prohibit a doctor from using his own sperm to impregnate a patient without her consent and provides no legal recourse for women and their children who find out years later.

“Fertility fraud is a very real issue to Ohio families today,” said Powell. “There has been an alarming number of cases in which through DNA testing, fertility doctors were found to have used their own sperm for in vitro fertilization, rather than the sperm from an approved donor.”

H.B. 64 also allows the patient, her spouse, or their child born as a result of the procedure to take civil action against the fertility doctor.

State Representative Jena Powell is currently serving her second term as a state representative. She represents the 80th Ohio House District, which encompasses Miami County and a portion of Darke County.