Rep. Powell decided her choice would be individuals from her district, and she is “thrilled to have Mason and Mr. Ouhlt joining me at the State of the State.”

Powell said “government is all about the people, and I’m excited to have community members joining me.”

Powell’s office welcomes constituents to reach out with any questions or thoughts and to visit the Columbus office anytime. For more information call 614-466-8114 or email rep80@ohiohouse.gov.

Jena Powell, who was recently elected to the Ohio House representing part of Darke County and all of Miami County talked to News Center 7’s Jim Otte about her feelings toward a potential increase in the state’s gas tax. 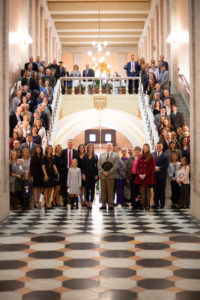 COLUMBUS – State Rep. Jena Powell (R-Arcanum) was sworn in to her first term as a member of the Ohio House of Representatives during Monday’s session.

She represents the 80th District, which includes Miami County, as well as part of Darke County.

“Swearing in day was such an incredible day,” Powell said. “With friends, family and community members joining me in Columbus, it was an amazing day kicking off the 133rd General Assembly. I am looking forward to representing the hard working people of Miami and Darke County for the coming two years. This is truly an honor.”

After graduating from high school, Powell went on to attend Liberty University and studied business marketing. She is an entrepreneur, working with her brother on their billboard company, Huntington Outdoor, which they started in their home county and expanded throughout Ohio and Indiana. 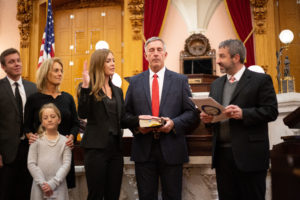 o is an avid supporter of creating new leaders through the non-profit organization, Forge Leadership Network. Powell is an active member of her local church, Greenville Grace Brethren Church.

Jena Powell grew up on a family farm in rural Darke County, Ohio, bouncing around in the back of her father’s pickup truck with her six brothers and sisters as her mom hauled grain in from the fields.

In the late summer, she would show sheep at the Great Darke County Fair and then run off to drink fresh-shaken lemonade or play ski-ball.

While still a teenager she started her own business with her brother, selling billboard ad space along highways of her county. It now includes more than 450 billboards throughout Ohio and Indiana.

“When I was 18 years old, I made my first sales call, right here, in the district. I was so nervous to knock at my first prospect’s door, my palms were sweating and my knees were shaking,” she describes it on her website.

The 24-year-old businesswoman will take all those memories and experiences with her as she leaves for Columbus in a few weeks to represent Ohio’s 80th House District as the youngest member of the Ohio State House.

And she’s already turning heads. This week she was named one of Forbes magazine’s “30 Under 30” up and coming difference makers.

On her Facebook page Tuesday, Powell responded to the recognition from Forbes.

“When I was young I would eagerly look through business magazines, checking out the under 30 lists. What an honor to be chosen for Forbes 30 under 30 list. This is not a solo accomplishment and I would never have even been considered without the hard work of my community,” she wrote.

For Powell, that community started by growing up in a Christian home that recognized the value of hard work. Her goal is to remove what she describes as the “strangling” burden of government overreach.

Powell defeated two other Republicans in the primary and then beat Democrat J.D. Byrnes in last week’s general election to represent District 80, which includes all of Miami County and part of Darke County.

She accomplished this by running as an outsider against her state’s political establishment.

In media interviews and on her campaign website, Powell repeatedly referred to the establishment in Columbus as the main hurdle that stands between many Ohioans and the realization of their dreams, whether it be in starting a small business or excelling in a trade, profession or family life.

She is unapologetically pro-life and pro-Second Amendment, is against Common Core, and believes the taxes are too high in Ohio. All these problems will only get worse if not confronted.

“I believe in the sanctity of human life,” she says. “Because without life, and the ability to protect it, there can be no opportunity.”

“I believe the future holds a lot of promise for the people and businesses of Ohio’s House District 80. In order to make that dream a reality, we have some work to do,” she says on her website. “The establishment in Columbus isn’t listening to what we need, and your voices aren’t being heard. That’s why I’m running…so that everyone in this district can go hard after their dreams and experience life to the fullest, right here at home.“

She not only ran. She won.  And she did it by not shying away from conservative principles.

Powell told Forbes she grew frustrated with local zoning policies that repeatedly blocked her from doing business in certain counties, which ultimately inspired her to run for office.

She is currently renovating a home that has fallen into disrepair in her home district. She calls it “a diamond in the rough,” much like the district as a whole.

“I’ve seen dozens of my friends grow up and leave the district because they believed there was more opportunity elsewhere,” she writes on her website. “I have a seven-year-old sister who started selling fresh fruits and vegetables grown on the family farm this past year. I loved watching her eyes light up as she sold her first dozen ears of corn, realizing the return of all the time she had invested in caring for and growing the produce throughout the summer. It is my hope that, like me, she chooses to remain in the district when she grows up. Like you, I have a desire to see more young people choosing to build their lives and pursue opportunities right here at home.”

Anthony Accardi is a writer and reporter for The Ohio Star.

He who calls you is faithful; He will surely do it. -1 Thessalonians 5:24

Jena Powell is the Republican Nominee for Ohio’s 80th House District and will appear on the ballot in the November General Election after winning Tuesday night with 49.5% of the vote. She had this to say:

I am incredibly honored and humbled by the support of our community! Thank you all so much for trusting me to serve alongside each of you as your Republican nominee for State Representative in the 80th district of Ohio.

Our team knocked over 16,000 doors and talked to voters in the rain and snow. I could never have done this without the help and support of so many of you. Along the way I was able to meet so many kind people who care about our community and want to see the 80th district thrive. I am thrilled to come alongside you and serve together!

The Right to Life Action Coalition of Ohio, Inc. (RTLACO) announced today their selection of Jena Powell for endorsement in the 80th Ohio House District Republican primary.   The statewide organization selected Powell because of her pro-life and pro-family stance on policy issues, consistent responses to survey questions, and  ability to be successful in her efforts.

“Jena Powell definitely meets RTLACO’s demanding criteria of candidates, and is a consistent conservative” commented Ed Sitter, President of the organization.  “We were pleased with Jena’s pro-life background and responses on our key issues, and anticipate a strong stance for life from her in the future in the Ohio House.” END_OF_DOCUMENT_TOKEN_TO_BE_REPLACED

I’m honored to be endorsed by Ohio Right to Life PAC!

“Conservative Jena Powell has earned the Ohio Right to Life PAC endorsement for the Republican primary for the Ohio House of Representatives.

Jena Powell believes life is a gift from God and will protect all innocent human beings’ right to life from their first heart beat until their last.

“The May 2018 Primary is critical for Ohio’s pro-life movement as we must retain, advance, and promote those candidates for office who best exemplify our life-saving mission,” said Mike Gonidakis on behalf of the Ohio Right to Life PAC.

Jena Powell is running in the May 8th Republican primary in the 80th District, which includes Miami and Darke counties.”

The 80th District includes all of Miami County and the southern portion of Darke County.

The Arcanum native says she wants to increase opportunity for Ohioans and restore common sense to our government.

Powell said she is running for state representative because government rules and regulations are strangling opportunity and eroding local control of our schools, our communities, and our country. Meanwhile, she said, establishment politicians in Columbus are more interested in protecting the status quo than listening to us. END_OF_DOCUMENT_TOKEN_TO_BE_REPLACED